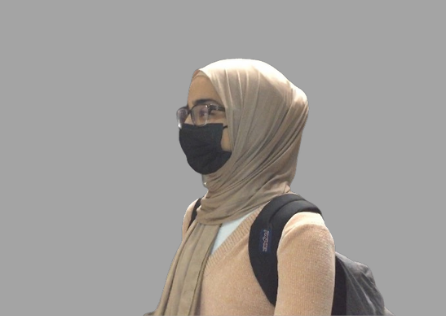 Embracing the Hijab, Reflections By Students

Getting ready for the school day, Sana Tokhi (‘23)  rummages through her closet for an outfit to wear. Grabbing a pair of denim jeans and a loose top, she is ready for the day.  She stands in front of her mirror and quickly adds the final part of her outfit: her hijab.

Tokhi wears the hijab in honor of her religion.

“Hijab to me is a very important part of my faith and part of me,” Tokhi said. “It reminds me of my strengths as a Muslim as well as my religious obligations. Being a hijabi is a reminder of my faith and with that in mine I strive to have positive qualities which represent my religion. I’m always happy and motivated to answer any questions people may have about my hijab.”

By embracing her faith, Tokhi re-defines what it means to be a Muslim teen in the 21st century.

“I love fashion and being a hijabi,” Tokhi said. “I feel like there are infinite possibilities to both combine fashion and the hijab. I always color coordinate my outfits, making sure that my hijab matches head to toe. I strive to never diminish modesty whilst being fashionable, and pertaining to current fashion trends. Most of the time I just lengthen or loosen the outfit, and sometimes end up with my own style.”

For Hosna Mohibi (‘22), wearing her hijab is a part of her identity and faith.

“To me, hijab means modesty, representing yourself to the world, and Islam,” Mohibi said.

Mohibi started wearing the hijab because she was inspired by the people around her.

“I started wearing it when I was in fourth grade,” Mohibi said. “I was always surrounded by other hijabi Muslims and I always looked up to them. They were always who I wanted to be.”

Hooriya Tanoli (‘23) started because she felt empowered through the hijab. In the midst of problems with women being objectified, Tanoli wears the hijab to show others that she wants to be judged based on her personality and intellect.

“I started because I wanted to be closer to my faith,” Tanoli said. “Everytime I put it on, I feel more powerful. You’re defying modern day beauty standards.”

Tokhi didn’t need any assurance from her family to wear a hijab because it simply felt natural for her to do so.

“I started wearing the hijab because of my role model: my mother,” Tokhi said. “I was never forced or even asked by anyone to become a hijabi. The thought of following her footsteps made me very happy and proud of who I was. I first wanted to start wearing it during my first day of sixth grade. I was firm in my decision, but I was too little and naive to understand the real meaning behind it. Therefore, my mom knew the right time would be a bit later. I ended up practicing the next summer.”

Tokhi also appreciates being able to positively represent her faith especially after hate crimes in the last 20 years.

According to the American Civil Liberties Union Foundation, Muslim women who wear the hijab are more likely to be discriminated against; 69% of women who wore a hijab reported at least one incident of discrimination compared to 29% of women who did not wear a hijab.

For Mohibi, it began in middle school.

“I did get bullied,” Mohibi said. “I had people tugging on my hijab and trying to choke me with it. And there are those microaggressions like ‘oh you have a towel over your head.’ I’ve noticed that after people get to know me, they apologize and understand that’s not who I am.”

However, Tanoli never faced any direct harassment. While she does sense that she gets longer stares, she feels respected.

“I have noticed that I get longer stares,” Tanoli said. “But I don’t think people treat me that differently to be honest.

French legislators voted 160-143 in favor of a ban on “ostensible religious symbols” in sports competitions following a proposed amendment from Les Républicains, a right wing party who argued that headscarves can risk the safety of athletes wearing them.

Following the proposed hijab ban in competitive sports, many hijabi students on campus have expressed their views. Tanoli had a negative reaction to the French Senate vote.

“I was quite angry about that. Hearing that France is trying to shut off the hijab [in sports], it just made me really mad,” Tanoil said. “Literally no one does anything but wear a hijab on their head and you have a problem.”

While President Emmanuel Macron and his party opposed the ban, supporters of this law insist that “religious neutrality” is required in sports and a hijab stands in opposition to this. The French football federation already bans women from wearing the hijab in official matches, and headscarves are prohibited in schools and government buildings.

Numeous athletes have competed in the hijab at the Olympic Games, and various headscarf designs have been developed to allow Muslim women to safely compete with their heads covered.

Similarly, Mohibi was upset about the vote.

“It’s disappointing,” Mohibi said. “It’s funny how they say that ‘hijabis are being suppressed,’ but then they suppress us from our choice of wearing a hijab.”

Mohibi believes that the media has earned its place as an incorrect source for spreading misinformation about the hijab. The bias present in media outlets has caused society to perceive hijabis differently.

With World Hijab Day having just recently passed on Feb. 1, it’s time to stop holding false misconceptions and stereotypes about the hijab, and start reflecting about the true meaning of hijab.

“When some people see my hijab, they think I’m a terrorist,” Mohibi said. “My ultimate goal is that I want people to understand that we’re just people,” Mohibi said. “I’m no different, I just have a hijab on my head.”

Donate to The Charge
$0
$500
Contributed
Our Goal
Submitting donation...