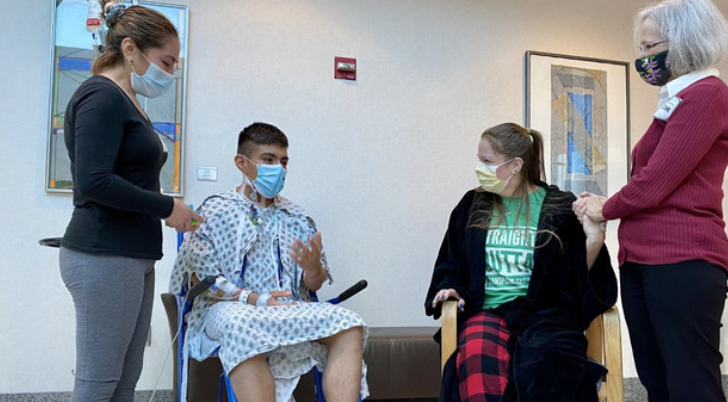 “I Would Do It Again”: Patriot Teaching Assistant Gives Kidney

The room is silent, except for the constant clicking of a mouse. Staring at her computer screen intently, Patriot Teaching Assistant Kat Velkoff is researching the steps on becoming a living kidney donor. Smiling to herself, she recalls a memory of an old friend who also needed a kidney.

Why Kat Velkoff Gave a Kidney to a Stranger

“When I was in high school, I actually had a friend who was in need of a kidney, and he was on dialysis for a long time,” Velkoff said. “Before I met him, he actually had gotten a kidney from his dad, and a couple years ago, he got a second kidney from a deceased donor.”

This experience inspired Velkoff to do some research in the middle of the pandemic and find out how she could become a living kidney donor.

“I started doing some research and I found out that you can be a living kidney donor, and I was like, oh my gosh, I want to do that,” Velkoff said.

The recipient of the kidney was 24-year-old Agustin De La O Martinez who had been receiving dialysis treatments.

Martinez says that he remembers the call for his kidney match like it was yesterday.

“Without ever hearing the voicemail or waiting till I got home, I called back immediately,” Martinez said. “After she told me of the news and how a perfect match had appeared, I was filled with so much joy. I really wanted to cry there and then, but I held my emotions in.”

Velkof says that she found out he had been on dialysis for four years, and he had been waiting for a kidney for two years.

“Dialysis used to take a huge toll on my body which was a treatment done to all end stage renal failure patients,” Martinez said. “Since I no longer had functioning kidneys I needed this treatment just like any other dialysis patient to stay alive.”

Reflecting on the experience, Velkoff says that the process for donating her kidney wasn’t smooth.

“It is not all rainbows and sunshine,” Velkoff said. “There are a lot of personal questions. You have to meet with a social worker, a transplant coordinator, and a dietitian. You have to do an EKG, a chest X Ray, blood typing. You have to give them a full day’s worth of urine, and every time you do a test, you have to pass that test and prove that you are in good health before you can do the next thing.”

According to Velkoff, the medical team decides whether you are eligible to donate. If a person gets approved, they have to repeat the tests. The team does a craft type matching with the recipient, mixing blood with the recipient’s, to make sure there’s no reaction.

“If anything ever happens to my kidney, I move to the top of the transplant list, but that’s extremely rare,” Velkoff said. “They do so much testing beforehand and make sure that you are in good health and  a good candidate.”

It’s a strange bond, the one between donor and donee. Velkoff and Martinez barely know each other, but we’re literally linked by blood, by an operation that profoundly changed their lives.

“Meeting Kat was a gift of a lifetime,” Martinez said. “Prior to surgery I didn’t know anything about her, but now as time has gone by, I’ve gotten to know a couple of things about her. I know that she’s a huge Star Wars fan, which is kind of funny because that’s something both she and I have in common.”

“They won’t give you any information before you meet them and there is no guarantee that they will want to meet you, so both people have to agree to it. I know that I have a new friend and he’s out there and he can do all of the stuff that he loves to do,” Velkoff said. “He’ll just text me good morning and ask me how my day was and it’s so wonderful.”

Martinez says that he is relieved to no longer have to deal with dialysis or his daily liquid intake,

“For me to finally be able to enjoy consuming as much water, juice, soda or coffee felt like a lock had been finally taken off. There was no longer a restriction on how much I could drink per day,” Martinez said. “Now that I’ve gotten a new kidney, I have to continue with the same routine that I had before which was to maintain a healthy and balanced lifestyle. I jog and more recently I have gotten into reading books. Last but not least, I like to spend some quality time with my family and the friends who have been there with me since my kidneys stopped functioning.”

It may have never crossed your mind that you, too, could donate a kidney to someone who is in desperate need. More than 100,000 Americans suffer from end-stage renal disease, or kidney failure, and are currently waiting to receive a transplant.

“Everybody that I have talked to has said if they could do it again, they would and I would too,” Velkoff said. “My body is recovering wonderfully. I only had to take three weeks off of work, and then I was back.”

Donate to The Charge
$0
$500
Contributed
Our Goal
Submitting donation...